In Holiday visit the Churches of Lucca!

As everyone knows Lucca is one of the oldest towns that exist in Italy and for this reason has an artistic heritage of a certain scale.

If you are interested in discovering the cultural aspects of this town certainly can not overlook its monuments, especially churches, which showed through the different architectural styles, different influences that have in succession over the years. 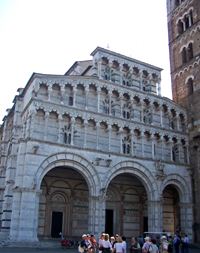 Originally built by the will of San Frediano, bishop of Lucca who died in 588, around 1070 was rebuilt under the will of Pope Alexander II (1061-1073) and was consecrated in the presence of the Countess Matilde di Canossa.
Towards the end of the twelfth century began the third and final reconstruction, which finally ended around 1635 with the reorganization of the facade.
Inside you can watch a series of important masterpieces, among the best known are undoubtedly the ancient crucifix of the "Holy Face" and "funeral monument of Ilaria del Carretto." 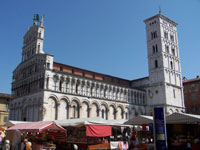 Has always been the center of the city and is situated on of the Roman Forum. Built from the second half of x century, driven by Pope Alexander II, the fact that the work to complete even have gone in later eras is the answer to the different architectural styles that characterize it.

Located outside in the highest part of the church is a statue dell'arcangelo San Michele ragginge that about 4 meters in height.
Among the works should be kept within marked the Madonna and Child, glazed pottery of Luca della Robbia.

According to tradition he was wanted by the San Frediano and is characterized for being one of the most important centers for the dissemination of Gregorian liturgical form.

The place on the mosaic facade depicts Christ the Redeemer who ascends to heaven in a range from two almond angeli.Lo is of Byzantine style and is attributable to the School of Lucca Berlinghieri. Of no less importance to the baptismal font magnificent century.

It is located south of the city on a Roman settlement. It appears as a basilica with three naves with a transept el'interno is mostly painted fake stone.

The facade is white limestone, while the rest of the building is mainly made of stone masonry of sand or gravel.

The whole area of the church was the scene of archaeological excavations, visited, which have brought to light Christian buildings.
Inside we can admire the fresco with the "Baptism of Christ" and the bezel painted with "Madonna between Saints."

Located in Finlungo, is located in the center of Lucca. It was rebuilt around the mid-twelfth century. This is a basilica with three naves on pillars with apse.

The facade is decorated in the style of sculptural decoration to blind arches supported by colonne.La church is the symbol of how the Pisan have influence in Lucca.

Located outside the walls duecentesche, is a very semplice.Sulla building facade are two tombs in the Gothic style. Inside you can admire fifteenth century frescoes attributed to Rosselli and Gozzoli.

History, Art and Culture in Lucca